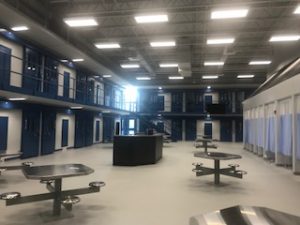 COAL TOWNSHIP – Northumberland County officials are urging the union representing its COs, or it’s Correctional Officers, to accept its proposal addressing staffing shortages at the county prison.

Schiccatano says the first part of the proposal includes mandates to give ‘double-time’ payments to current COs asked to cover additional shifts.

The second part of the proposal includes the county hiring an outside company to handle the guarding of inmates at the prison when a prisoner has to go to the hospital. Right now, Schiccatano says two COs have to accompany an inmate to the hospital.

The third part includes the county hiring ex-COs from state or county prisons to fill-in for current COs at the Coal Township campus. Schiccatano says those ex COs would be put on a call list.

Currently, the county is working with the sheriff and parole officers to use their staff to fill weekend shifts, which Schiccatano says is still the biggest issue.

He says if the staffing proposal is accepted, the county would still work with the sheriff and parole offices to help fill gaps in staffing.

The county prison was forced to implement lockdowns in June due to a lack of weekend staffing. Since then, Schiccatano says there haven’t been any lockdowns.

There are currently 37 COs at the prison, with the county shooting for about 60 to operate the prison safely. 84 COs would need to be hired in order for the prison to be fully staffed.