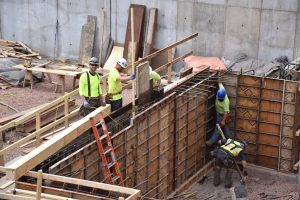 LEWISBURG – Interior work on the PRIME project at Evangelical Community Hospital has stopped as a result of three positive COVID-19 cases among workers. In a release Friday, Evangelical says Quandel, the project construction manager, has temporarily suspended interior work after the three cases occurred on two shifts.

William Anderson, Executive Vice President and COO at Evangelical says the goal to resume interior work is June 1. Some exterior work, including the curbing and paving in the parking lots, will continue as scheduled. It’s also unknown if this situation will impact the recently announced revised timeline of completion in late September or early October.

Evangelical says the site again will be completely disinfected from top to bottom. Air-handling units will be brought online to aid in improved air circulation throughout the building. Potentially exposed workers have been instructed to self-monitor for symptoms. Accommodations are being made to screen workers as well. Anderson says these measures were put in place when work resumed at the beginning of April.