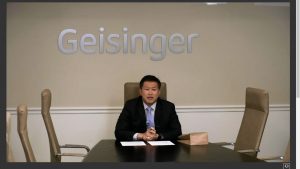 DANVILLE – The first case of the newly defined Multisystem Inflammatory Syndrome in children has been reported in the Geisinger system.

During his weekly update, Geisinger President and CEO Dr. Jaewon Ryu announced the system’s first case, “I think that was only a matter of time given if other markets are seeing it, that means it’s part of the disease. We’re very fortunate in this regard that we have a children’s hospital here in Danville, and our team of experts is rapidly working.”

The current patient condition is unknown at this time. Earlier this week, PA Secretary of Health Dr. Rachel Levine says the Department of Health is working with hospitals and children’s hospitals on reporting cases through its data system. The syndrome first popped up in New York, where reports say nearly 150 children have been sickened and three have died. New Jersey has also confirmed 15 cases in children ranges 3 to 18.

Dr. Ryu says one thing parents can do is be vigilant, “Paying attention to symptoms…if there’s any concern, obviously bring them in to be evaluated and potentially tested. In the meantime, if you don’t have any concerns, it’s emphasizing those same, preventive measures.”

Geisinger says its 24/7 COVID-19 hotline is available for any concerned parents with this disease that can offer clinical advice and counsel.