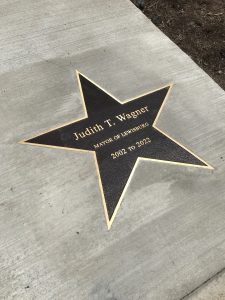 LEWISBURG – It was a historic day in downtown Lewisburg Tuesday. A second bronze star is now on display along Market Street, honoring Judy Wagner, the borough’s former mayor of 20 years.

“It’s almost surreal because I’m a fourth-generation Lewisburg family and I’ve gone up and down Market Street all my life. I’m just so please I was even able to serve my community. I stand on the shoulders of some pretty amazing people who have helped Lewisburg become what it is today and the next generation is going to be even better.”

The only other person with a bronze star in their honor is former Campus Theatre Owner Harold Stiefel.

Borough Development/Grants Manager Steve Beattie says the community simply wanted to do more to honor Wagner after announcing her retirement last December, “We’re just taking a moment to thank Judy for all her good work and everything she does. Every time we walk past that star, we know Judy is there, and she’s helped build this town in her small way.”

Beattie says a small committee was formed after Wagner’s retirement and then sought donations for the bronze star. Lewisburg Borough, the Lewisburg CommUnityZone and Lewisburg Downtown Partnership also helped put together Tuesday’s celebration.

Wagner says the best part of her job has been meeting people, “I’ve had an opportunity to meet amazing people I never would have met otherwise, both to work with them on council, the borough staff, and the community. The people in Lewisburg love their community and they want it to go forward. It’s just been a pleasure, a joy, and a honor to work with these people.”

Along with serving as mayor, Wagner served on Lewisburg Borough Council, the LDP board and more. She was also a teacher and guidance counselor in the Lewisburg Area School District for 38 years. Wagner is still active in the community, serving on the Regional Police Commission and the Lewisburg Shade Tree Commission.