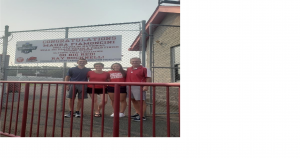 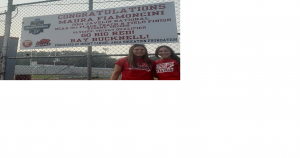 During a ceremony this week, Fiamoncini was honored by the district by displaying a sign in her honor that is now at the historic MCA Silverbowl, which will begin its 90th season this fall, “I just can’t believe my name is up at the stadium right now. It was so great to see all the community members come out to support me on that day as well, and they’ve always supported me during my eight years as well. I’m just really appreciative for all of it.”

The Mount Carmel and now Bucknell University alumn recently completed her track and field career in the javelin – including qualifying for the finals and placed 7th at the US Olympic Trials. She also won the bronze medal at this year’s NCAA Division I Track and Field Championship, and won many other events on the scholastic, collegiate and international levels. Fiamoninci was Mount Carmel’s first female state champion as well.

Fiamoncini gives a lot of credit to her former coach at Mount Carmel, Anna Ditchey, with some of her best high school memories coming from their time together, “She always made it interesting. We always competed at practice and she was just someone who was a great motivator for me. She always knew how to push me during competition.”

But her last season competing wasn’t easy, playing through a torn labrum, forcing her to throw in the javelin one every two weeks – essentially only during meets.

It’s even all the more reason she’s celebrating achieving her goal of finishing in the top 8 at the U.S. Olympic Trials, “It was definitely an unforgettable experience for me and I’m really happy that’s how I ended my career. I honestly didn’t think that was something I could achieve when I started throwing javelin. I’ve come a long way the past couple of years. I’m very surprised.”

Now in her post career, Fiamoncini is staying in the area, beginning a data analytics job with Geisinger at the end of August, while still planning to stay fit with more trips to the gym.