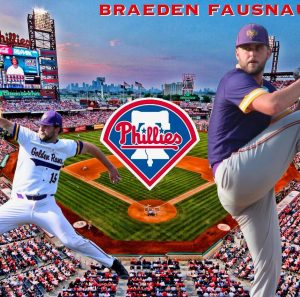 PHILADELPHIA – One Valley native is getting the chance to live the dream of playing professional baseball and being signed by the team he grew up watching. Danville High School graduate Braeden Fausnaught has signed with the Philadelphia Phillies following this week’s MLB Draft, his mom posted on social media Thursday. Terms of the deal are unknown, but Fausnaught will report to the Phillies Class-A affiliate, the Clearwater Threshers, for six weeks.

Fausnaught grew up going to Phillies games, when his family had Sunday season tickets for several seasons.

Fausnaught had been pitching for the Trenton Thunder of the MLB Draft League, posting a 2-1 record with a 3.38 ERA in eight innings, and 11 strikeouts. Before that, he helped lead West Chester University’s baseball team to the NCAA Division II World Series.