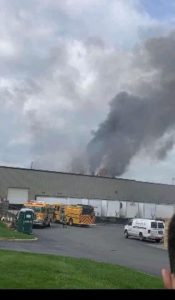 LEWISBURG – Several volunteer fire crews are at the scene of a working commercial fire at PlayWorld in Buffalo Township, Union County. According to emergency communications, the fire was reported just before noon Tuesday. Crews indicate it is a working fire in an oven there, and a third alarm was advised in the shipping area. Crews also say the fire is through the roof and employees are being evacuated. Then just before 1:30 p.m. Tuesday, an explosion was reported inside the building and crews were ordered to evacuate. EMS was called to the scene just after 2:30 p.m. Tuesday as well.