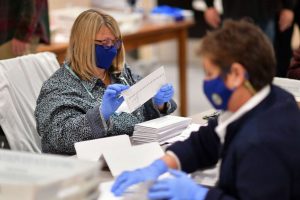 LEWISBURG – County commissioners around here say elections have been and will be conducted fairly and accurately. A panel of local elected leaders addressed this during Monday night’s Susquehanna Valley Conservatives meeting – their first in-person meeting since the pandemic began. The topic was chosen as a way to rebuild voters’ confidence in elections.

Snyder County Commissioner Chairman Joe Kantz, “I’m 100% confidence our results were accurate, because we know that what comes in on paper – on the paper ballot – that’s scanned into the machine – that’s zeroed out before the election begins – is accurate. It’s the one good decision Governor Wolf has made during his time in office, calling for a paper ballot system.”

Union County Commissioner Jeff Reber, “Here in Union County, there were two audits done after Election Day itself. You risk limiting audits when there’s one done by us and one done by a third party contracted through the state. So as far as Union County goes, I feel very confident in our vote totals.”

Kantz said a forensic investigation of last year’s would be a waste of time, “Senator (Doug) Mastriano knows this…this complete conversation about an auditing of the machines is ludicrous. Those machines are zeroed out after every single election so that they are prepared for the following election. to call for an audit is disingenuous, when he knows and has been educated that there’s nothing to audit.”

However, Kantz says too many changes were made at one time…with the addition of the Act 77 election reform bill signed by the governor in October 2019. Kantz also says mail-in ballots lead to extra work for elections staff – and that’s resulted nearly 30 counties now without election directors – which Kantz says could potentially disenfranchise voters. He says mail-in ballots are also inconvenient for voters, and there are problems with timing.