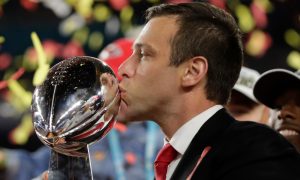 KANSAS CITY, Mo. – In just four years as General Manager of the Kansas City Chiefs, Mount Carmel native Brett Veach has been instrumental in the team’s quick rise to the top of the NFL.

On The Steve Jones Show this week, Brett Veach says he always looks back on his coal region roots that helped him find success, “This profession, its tough and there’s a lot of sacrifices you have to make to move up, but I think it’s growing up in a town like Mount Carmel where football was so important to me at an early age it really fueled that fire. If I grew up in some other time, would I have the ability to sacrifice so much to be in this position? Probably not.”

A big part of the team’s rise to the top is Veach helping draft quarterback Patrick Mahomes by trading up to the 10th pick in the 2017 NFL Draft.

Veach says he had the team begin seriously looking at Mahomes after watching him play through a shoulder injury in a blowout loss at Iowa State, “Your mind starts to get creative and you think, ‘What if you put him with Andy Reid, and what if you surrounded him with some talent?’ So that’s kind of where it all started, but it was really a moment that most people won’t look at and say ‘A blowout loss to Iowa State is when you had this epiphany?’ But really, that’s when you start thinking about all the intangibles that you’re not going to see on tape…but you’re going to see in-person if you’re there.”

Before his NFL career, Veach was a standout running back at Mount Carmel where he was named state player of the year in 1996 and was a two-time All-State selection. He was also selected to participate in the Big 33 game. After graduating from the University of Delaware, Veach spent six years with the Philadelphia Eagles before joining the Chiefs in 2013, and was named GM in 2017. The Chiefs take on the Tampa Bay Buccaneers Sunday at 6:30 p.m. on CBS.

Listen to the full interview here.