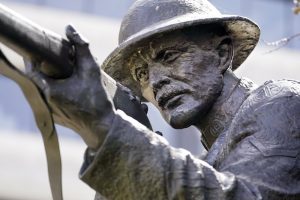 HARRISBURG, Pa. (AP) — AP is reporting…The academic press that published a Pennsylvania state senator’s book about World War I hero Sgt. Alvin York has asked him to review a list of factual errors and sourcing issues in the book and the press’ director said Tuesday it plans to publish a corrected version early next year.  University Press of Kentucky director Ashley Runyon outlined plans for the potential corrections and revisions to Sen. Doug Mastriano’s book in emails Tuesday to The Associated Press and to another researcher looking into York’s 1918 acts of heroism while fighting in France.

Runyon said the press “will allow the author the opportunity to respond to the sources in question before preparing our final list of errata and corrections for a new printing. The verified sources and other corrections will also be reviewed by an outside scholar for confirmation.”  She said the press does not typically ask for an outside review for reprints but was “adding this external layer of review to ensure the accuracy of any corrections in the reprint.”

Mastriano’s opposition to pandemic mitigation efforts in Pennsylvania and support for former President Donald Trump’s efforts to overturn his election loss last year have made him a one-man force in state politics. He has said he is considering running for Pennsylvania governor next year, when incumbent Democratic Gov. Tom Wolf is term-limited.  Researchers have questioned Mastriano’s claim that he located York’s battle site with precision, identified erroneous footnotes and raised doubts about a photo that appears on the book’s cover.

Mastriano claims the government photo shows York with prisoners from the famed battle, contradicting the military photographer’s caption. The AP also identified sourcing errors in the book in a story published six months ago.  York led a small group of badly outnumbered American soldiers behind German lines to disrupt machine gunfire in the woods of northern France during the waning weeks of the war. More than 20 German soldiers were killed and 132 captured, winning York widespread fame and a Medal of Honor. (Associated Press)