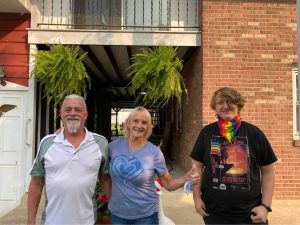 SELINSGROVE—The phrase “trash to treasure” has some real meaning for a 16-year-old from Selinsgrove who found a couple’s wedding day video during the borough’s annual clean-up event. Logan Adams, a junior at Selinsgrove High School, says he was picking through the curbside trash looking for things to add to his collection, “I was driving around looking for different items like stereos, and of course VHS tapes because I’m a collector of VHS. And so, when I found these in a little basket, I picked them up and put them in the back of the car without looking at them too much.”

Logan says he found over 100 VHS tapes during the weekend before the trash was picked up and when he went through his finds, one tape stuck out, “I started going through it and I saw one of them said, I think it was the 30th, ‘September 30th The Wedding’ and I thought ‘Oh shoot, what do I have here?’”

What he had was the video tape of Kevin Bordner and Lynne Brandau’s wedding day, “Well we had gathered a lot of things in our garage from our former house, stuff that was in the attic, and it got mixed in with the stuff going out for clean-up. I was just in kind of automatic mode of picking stuff up and putting it out and I hadn’t even realized what I had done,” says Bordner.

Logan asked his mom to post the VHS tape on Facebook in hopes of finding its owner. Within a short period of time, they were all connected, “My phone rang, it was my mother, she saw it on Facebook and everything kind of blew up from there. I contacted Logan’s mom and made the arrangements to drop them off,” Bordner adds.

A drop-off that made Logan happy, “If I would have accidentally got rid of something, I sure as heck would have wanted it back. I know it would be really nice if someone saw that and put some thought into it and I thought, I really should do the same because it’s just the right thing to do,” Logan says.

Kevin says he was a little surprised and pleased to hear that someone Logan’s age would be conscientious enough to make effort and return the tapes. And, as an added special feature to the story, Kevin says he and Lynne will be celebrating their 25th anniversary this month, “Being our anniversary coming up, a milestone anniversary, and being that it’s our wedding tape, we were both just very ecstatic and very thankful.”