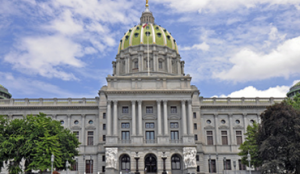 HARRISBURG, Pa. (WHTM) — WHTM is reporting… The clock is ticking, and survivors of childhood sexual abuse are watching as a constitutional amendment they’ve been pushing would have to pass the State House by the end of this week to make the May ballot.  But the house is not yet organized and not in session, so what will happen to the amendment?  “I am here for victims. I am not here for anyone else today,” Said Representative Jim Gregory (R-Blair County).  Gregory, a State Rep. and survivor of childhood sexual assault, testified with photographs and memories.  “It happened between those two garages, as I was pressed up against the wall on the right,” Gregory said.  House Bill 14, which would allow past abuse survivors to sue their abusers beyond the statute of limitations, is Gregory’s.

Gregory had until age 30 to come forward regarding his childhood abuse.  “In my case, the abuse happened at ten, and I first started talking about it, under very difficult circumstances, at the age of 48,” Gregory added.  House Bill 14 passed and should be law, but it was bureaucratically bungled and left off the ballot after the senate bundled it with two other amendments, into Senate Bill 1, and passed it.  “Please allow House Bill 14 to appear on the ballot by itself,” said Gregory.  Gregory doesn’t trust Senate Bill 1 and says survivors loathe it.  “No. No. It needs to be done this way so the victims don’t feel like they’ve been punched in the gut again,” Gregory said.  But it seems another punch is coming.  To make the May ballot, House Bill 14 needs to pass the house by the end of this week. But will it?

“I think it’s very unlikely, unfortunately. We’re ready to work, we’d love to vote on that issue, and I wish we could be in session,” said GOP Leader Representative Bryan Cutler (R).  Newly elected Speaker of the House Mark Rozzi is starting a listening session this week but doesn’t seem close to starting the legislative session.  House Democrats support the listening session, but said in a statement, “When our leaders sought to negotiate House rules and work in special session to help the survivors of child sex abuse, Republicans declined.”  “I resigned myself to the fact that it’s not going to be on the May ballot months ago. There’s only so many things I can control,” Gregory concluded. “This has been an emotionally exhausting experience for me the past several days.”