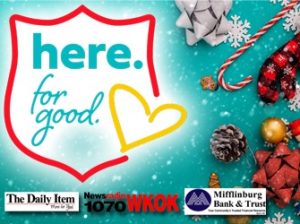 NORTHUMBERLAND — A Northumberland mother of two children is dealing with a seizure disorder that makes her incapable of driving or walking to work.

Deanna Herold, 33, has been “struggling for a few years now,” but now, after being diagnosed, is now able to receive SSI benefits. She has also been receiving medications that are helping control seizures, she said.

Even buying basics, like milk, for her is a struggle, financially. “I am lactose intolerant. I pay more for a half gallon of milk than most people pay for a gallon of regular milk,” she said.

Herold has two kids, a son and daughter, and babysits for another, she said.

“SSI helps,” she said, “but it doesn’t quite do enough for me to do the extras at Christmas and birthdays.”

For Christmas, she said, her son, 12, would like something Pokemon related. “He is obsessed with Pokemon. He’s really small, so he gets picked on a lot. He had trouble making friends for a while, but playing Pokemon has helped him make a few friends,” Herold said.

She said her 9-year-old daughter “is into a little bit of everything. She wanted Ken dolls for Christmas, the boy Barbie. She has girl Barbies so she wanted a boy doll too. She is also into unicorns.”

The Here. For Good. campaign is a continuation of the Needy Family Fund, which has raised more than $3.35 million since 1987 during the holiday season to help the Valley’s families.

The campaign is administered by The Salvation Army citadels in Milton and Sunbury, and sponsored by The Daily Item, Sunbury Broadcasting Corp. and Mifflinburg Bank & Trust.

Donors can make checks payable to Here. For Good, and mail or drop them off at any location of program co-sponsor Mifflinburg Bank & Trust. Donors can also mail a check to 250 E. Chestnut, Mifflinburg PA 17844, or donate online at hereforgoodcampaign.org.