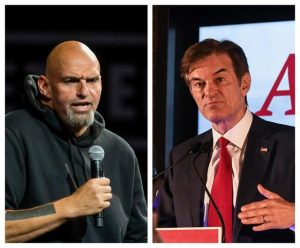 HARRISBURG (WHTM) – A new WHTM/Emerson College Polling/The Hill poll shows a virtual tie in the race to represent Pennsylvania in the United States Senate between Democrat John Fetterman and Republican Mehmet Oz.  In the poll of 1,000 likely Pennsylvania voters, Fetterman led Oz 44.6% to 42.6% with a +/-3% margin of error. Third-party candidates received 5% and 7.9% were undecided.  Nine percent of Republicans (twice as much compared to Democrats) said there were undecided. Independents leaned towards Oz at 45.5% and 11.8% were undecided.  Despite the race appearing to be tight, nearly 55% of voters surveyed said they expect Fetterman to win. Twenty-one percent of Republicans said they expect Fetterman to win, while 13% of Democrats expect Oz to win.  Oz led among Hispanic voters with 46%, while Fetterman received more than 65% support from African Americans.

More than half of those surveyed (58.5%) said Fetterman’s May stroke and hospitalization made no difference in their decision whether to vote for him. Twenty-seven percent said it made it less likely they’ll support him. Forty-seven percent of Republicans said the stroke made them less likely to vote for Fetterman.  Since the August Emerson Pennsylvania poll, the share of voters who say Fetterman’s stroke makes no difference on their vote has decreased by nine percentage points, 68% to 59%, and the share of voters who say it makes them less likely to support him has increased by five points to 19%.

Forty-seven percent of voters said Oz’s longtime New Jersey residency had no effect on their vote, and 38.5% said it makes it less likely they’ll support him. Nearly 60% of Democrats said Oz’s residency made it less likely they’ll support him.  Since the August Emerson Pennsylvania poll, the share of voters who say they are less likely to support Oz because of his residence decreased by 12 points from 51% to 39%.  State Sen. Doug Mastriano told a crowd in North Philadelphia on Friday, that Latinos were the future of the Republican Party and encouraged them to support his campaign for governor, which he said was all about “Dios, patria, familia.”

“Now it’s up to the Republican Party to get off of our seat and get out into the community,” he said. ”We are at a crossroads between tyranny and freedom.”  The event, dubbed Philadelphia’s 1st Hispanic Town Hall, was sponsored by the Small Business Union, whose founder Fernando Suarez, said he and other business leaders were concerned about crime, the economy and frustrated with decades of Democratic leadership in Philadelphia, leading to their support for Mastriano.

About 75 people attended, with seats for at least double that. The appearance prompted about 30 people, including surrogates for Attorney General Josh Shapiro’s gubernatorial campaign, to protest Mastriano’s visit outside the venue, the Deja Vu Social Club on Erie Avenue. The Philadelphia appearance follows a slew of bad news for his campaign in recent days, as strategists and GOP operatives have started questioning his chances, given a widening gap in the polls and little money. And as his floundering campaign has become the butt of late-night TV jokes.

During the town hall, Mastriano was interviewed by Lourdes Ubieta, a Latino conservative media personality, who read submitted questions, which overwhelmingly focused on crime, drugs, and their impact on small businesses. Gun violence in the city has continued at near-record levels this year, with 401 people killed in homicides in 2022.  “Lawlessness is killing Philadelphia,” Mastriano said. “Philadelphia is where this nation was birthed in 1776. It should be a hallowed place. It should be a place where people come to enjoy the heart and soul of the nation. But now it’s a place of danger. And your kids are condemned to these dangerous areas. You’re not sure your babies are coming home safe because of the lawlessness out there.”