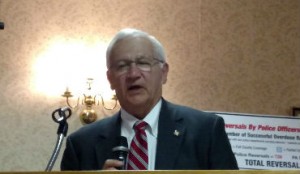 State Senator Gene Yaw (R-23rd, Williamsport) led a panel discussion with regional experts in an educational forum Wednesday on what this could mean for Union and Lycoming counties. One of the panelists was Tom Murphy, Director of Penn State’s Marcellus Shale Center of Outreach and Research, “There’s about 25-ish hundred municipalities with ordinances and a very small percentage of them have anything in their ordinance structure dealing with solar of any type, whether it’s rooftop or whether or it’s a utility scale less than 10%.”

In Union County, the only solar facility is Bucknell University’s solar array. Planning and Economic Development Director Shawn McLaughlin says there are other projects being explored and some farmers have gotten letters from solar companies looking to lease their land.

He says there are 11 of 14 municipalities with standard zoning ordinances – five of those have adopted solar ordinances. He says those are Kelly, Buffalo, East Buffalo, White Deer, and Gregg Townships. McLaughlin says counties without any sort of zoning ordinances are Union and Limestone Townships and Harleton Borough. He says the county planning commission does encourage all municipalities to have some sort of zoning ordinances adopted to protect themselves in the future. Shannon Rossman, Lycoming County Planning and Community Development Director, gave an overview of some ordinances in that county, “We do require that they do a Blaire study to make sure that they’re not causing any issues for the surrounding neighbors. We look at it and we have it reviewed by our experts. We also have noise requirements that they have noise analysis done because there is some noise associated with these facilities.”

McLaughlin says the five Union County municipalities with solar ordiances are similar to the ones described in Lycoming County. Senator Yaw later expressed concern about Pennsylvania currently not being able to handle recycling solar panels in the future. Murphy says most typically last a while, “We also have to recognize that we’re talking about something that has a long potential lifetime. So ones that are being destroyed now, most of those are going to landfills at this point. When you start to dispose of these in mass, meaning a whole facility needs to be taken down and repowered or taken offline, that’s where the industry likely will jump in using some of the technologies that we’re already seeing in some other countries.”

The panelists also assured residents of wildlife concerns being considered as well and there are those concerns in Union County as well.