HARRISBURG, Pa. (AP) — AP is reporting… Pennsylvania is spending $45 million to add new state parks at a nature preserve in Tunkhannock, on Big Elk Creek in the Philadelphia suburbs and along the Susquehanna River near Wrightsville, officials were set to announce Tuesday.  The additions to the state’s 121-park system will be an existing nearly 700-acre nature preserve on the Vosburg Neck in Wyoming County, a 1,700-acre tract in Chester County and some 1,100 acres in York County.  The expansion was funded in the state budget that passed in July. They are the first new state parks in Pennsylvania since 2005, not counting Washington Crossing in Bucks County, which was transferred from the state Historical and Museum Commission.

The Vosburg Neck property, known as the Howland Preserve and owned by the North Branch Land Trust, is bordered by an oxbow turn in the Susquehanna River and includes an extensive trail system. 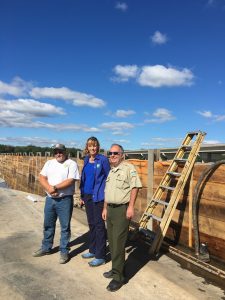 In Chester County, the new park will include 3.5 miles (5.6 kilometers) of Big Elk Creek, which feeds into the Chesapeake Bay at Elk River. Officials say the creek was long used by indigenous people and was an area of considerable activity for the Underground Railroad.  “There’s going to be a lot of history, a lot of stories to tell,” said Conservation and Natural Resources Secretary Cindy Adams Dunn. “And part of the park planning in that one will be, what’s the best way for us to do that?”

The York park, located a few miles from Gov. Tom Wolf’s home in Mount Wolf, is adjacent to large tracts owned by the Lancaster Conservancy — the former Boy Scout camp Wizard Ranch and the Hellam Hills Nature Preserve.  Dunn said the state recently purchased the York County property, assembled the Chester County land over more than a decade and is in final negotiations for the Wyoming County tract.  “It’s the opportunity of a lifetime to be able to serve the public in a way that the public demands of us,” Dunn said. “People came out in droves during the pandemic and reaffirmed their interest in parks.”

According to the Governor’s Office, the three parks represent an investment of $45 million from the $696 million for conservation, recreation and preservation in Wolf’s final budget.  The new parks will bring the Pennsylvania Department of Conservation and Natural Resources state park system to 121 parks statewide. With the addition of Washington Crossing Historic Park to the system in 2016, the three new parks bring the total added to the system in the past six years to four.  Susquehanna Riverlands is a mostly wooded tract at the mouth of the Codorus Creek into the Susquehanna River. Protecting critical water and forest resources, the land was acquired with assistance from the Lancaster Conservancy and is adjacent to its Hellam Hills and Wizard Ranch nature preserves. Combined, they protect the last large, wooded area along the Susquehanna River between the cities of Harrisburg, York and Lancaster.