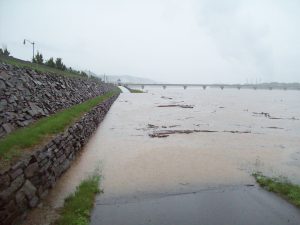 This photo of a 2018 Sunbury high water event, shows a section of Sunbury WPA wall that has already been replaced. A new section of WPA will be replaced next year.

A Historic Wall Must be Replaced in Sunbury

SUNBURY – Out with the historic old and in with the new in Sunbury…Local lawmakers say they have secured funding to replace an aging stone wall at the base of Sunbury’s flood wall.

The grant is for repair and replacement of the 1930’s WPA era stone wall. That wall, city officials say, is failing and needs frequent repair. Large, architectural, concrete blocks will go in its place.

He said a wide range of projects are in the works in Sunbury for next year, including the storm water and sewer line separation on Susquehanna Avenue.

The Reagan Street project was finished about a month ago.