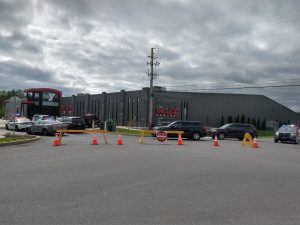 LEWISBURG – You may have seen and heard lots of emergency response at The Miller Center in Lewisburg today…it was only a drill, as the area’s first responders tested themselves in the event of an real active shooter situation. The drill took place Thursday, with the scenario being a domestic situation turning violent.

Matthew Exley is the Environmental Safety and Security Director for Evangelical Community Hospital and was the drill’s exercise director, “I think the exercise went very well. I think it did exactly what it needed to do. It taught us some things we did very, very well. It taught us some things we can improve on in the future, and it really gives us the chance now to improve on that. What’s really unique about this exercise is most community hospitals don’t have exercises that are this wide reaching.”

Exley says planning to conduct the drill began eight months ago, and the CMS (Center for Medicare Services) and state health department require hospitals to create a community-based exercise. He says part of the drill included sending patients to the hospital – Evangelical received six victims who showed up unannounced, plus an additional six trauma patients via ambulances from the scene. Geisinger also participated virtually and treated an additional 12 trauma victims. Fake blood and injuries were also used on volunteer victims from Penn College, American Red Cross and Seven Mountains EMS Council.

Director of The Miller Center Ryan McNally says employees knew the drill was going to take place but were not prompted when, “They were going about their day as if they would have been on a normal day, where they were doing their job, at their desk, or instructing a class, or training a client to create a realistic experience because we wanted to created as realistic an experience as possible to see how our staff responded when the threat emerged.”

Yost says this drill can be applied for any real life shooter situation, including in schools, “You learn that you can work together very quickly. You come together, respond in, form up teams that may not even know each other, but can coordinate together and do building searches and accomplish the mission.”

The Miller Center was closed for most of the day Thursday to conduct the drill. You can see the full list of agencies who participated in the drill below: