HARRISBURG — WHTM is reporting… The battle over abortion came to Harrisburg Monday with a March for Life and rally at the state capitol.  People at the rally and march celebrated the June Supreme Court decision that overturned Roe v. Wade and ended the constitutional right to abortion.  Bethany Lane, a student from Huntingdon, said, “I almost cried, I was so happy that we have this opportunity now.” Lane and her classmates came to the rally from Calvary Christian Academy. She said the issue goes beyond unborn children.  “We should support them after, after they’re born,” she said. 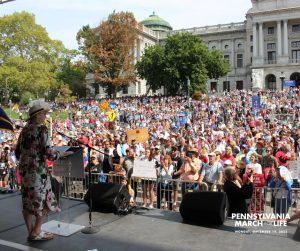 Pro-life activists also said there is still more work to do — they want to make abortion unthinkable.  House Speaker Bryan Cutler (R), said, “We cannot take our momentum for granted. This is not a time to let up…In the next several months, the men, the women on this stage, those in Washington, will likely find ourselves in some of the most important pro-life debates and votes that we likely will ever have the opportunity to make.”  Louis Rupp, who came from Hanover, said, “We have to fight for the states we live in until our nation is free of this slaughter.”

Abortion is still legal in Pennsylvania, but speakers at the March for Life encouraged people to vote for anti-abortion candidates this November, including Republican gubernatorial candidate Doug Mastriano.  “We are still talking about life, it’s the single most important issue I think in our lifetime, and so Pennsylvania, we’re at a crossroads,” Mastriano said at the rally.  Mastriano has said previously that he is “pro-life” and would prefer no abortions with no exceptions. Democratic gubernatorial candidate Josh Shapiro has said he would veto any anti-abortion bill he believes Mastriano would sign.

While some state lawmakers joined activists at the march, others set a different tone inside the Capitol.  “This continued attack against my rights, against our rights, sickens me,” said Rep. Jessica Benham (D-Allegheny County).  Democratic lawmakers voiced their commitment to abortion rights, introducing a package of legislation to protect and expand access to abortion.  “This fight for me is about my daughter,” said Rep. Danielle Friel Otten (D-Chester County). “We can’t allow our daughters and our children to think about a future where they might end up back here again.”