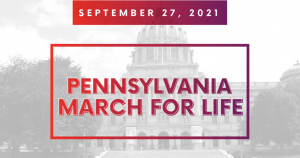 First Ever Pennsylvania March for Life is Monday

HARRISBURG – The debate over abortion is heading for a critical point, and many are set to gather in Harrisburg to make another push for the right to life…That’s the message of the first ever Pennsylvania March for Life taking place Monday, “We’ll be right at the front steps of the capitol, rallying for the protection of life from conception to natural death. Really just trying to come together…and really seeing thousands from across the state come together, to stand for life.”

Dan Bartkowiak, Director of Communications for the Pennsylvania Family Institute, a non-profit in Harrisburg aiming to strengthen families by partnering with other organizations such as pregnancy centers.

He says the time is now for the rally as the Mississippi abortion case looking to overturn Roe v. Wade will be heard by the U.S. Supreme Court around the beginning of December, “If that would be overturned, you now have it upon states deciding what policies will be on abortion. And so, the impact states will have is significant and the (National) March for Life really sees that and is looking to really partner with a variety of organizations in different states to see state marches for life happening.”

The rally is scheduled to begin at 11 a.m. at the front steps of the state capitol, followed by a march around the capitol building at noon. Catholic Diocese of Harrisburg Bishop Ronald Gainer will also preside at a Mass for Life at 9 a.m. at St. Patrick’s Cathedral.