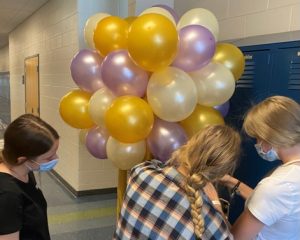 Proms Are Back at Valley High Schools

MIDDLEBURG – It’s prom season again at Valley High Schools. For the first time in two years, Valley high school students are gearing up for one of the biggest celebrations of the school year, while staying pandemic-friendly.

Midd-West High School’s Prom is tonight at Willow Stone Farm near Mifflinburg, which is an open air facility, “I think nobody expected it, so it was kind of like a shock and surprise we were even allowed to do it. I think everybody’s really excited, I know my friends are excited and everybody’s pumped. (Everyone’s) ready to get ready with everybody else, like a normal prom, take pictures, all that good stuff.”

That’s Caroline Zerby, a junior at Midd-West, whose been part of Class Congress helping make decisions for the prom.

She says there will still be some challenges to keep the night COVID-friendly, including no slow dancing, and students will have to mask up and social distance, “I think it might be hard for some people to social distance a little bit, but I guarantee we’ll keep that in order and I think a lot of people might wear their masks incorrectly, but I think we’ll also have a good handle on that one. But other than that, I think there shouldn’t be that many challenges…I think our numbers are fine. You can’t get in unless you have a ticket and we’re not selling tickets there.”

The school will also have hand sanitizer available at every table. Zerby says this year’s prom theme is a midnight garden theme, “We have some really nice floral arrangements for the center pieces. We have osme columns were making right now, there’s some nice table cloths. We’re not really sure what we’re going to do with the space yet because it is the first year we’re having it off campus, but I think it’ll be decorated nicely, we always meet the challenge, so I’m pretty confident it’ll look really nice.”