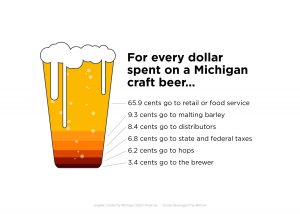 SUNBURY – Grab a ‘cold one’ at your local brewery–and help the local economy…so says an economist who recently visited The Valley. Dr. Trey Malone is an Assistant Professor and Extension Economist in the Department of Agricultural, Food, and Resource Economics at Michigan State University.

He says beer is booming because millennials don’t want ‘the standard’ anymore when it comes to finding great tasting beverages and food, “And as we move into a world where we have this  opportunity to create products that are specifically, uniquely local, it creates maybe this harkening back to the authenticity of the 19th century where you had your own local beer in every town you went in.”

Dr. Malone says today’s generation wants a wide varieties of options when it comes to beer, that means opportunity for local breweries, “It’s not always true that consumers only want the highest alcohol content beer. Some consumers only want the lower alcohol content beer. So we’re kind of experiencing this resurgence in interest and energy around the nutrition content in beer products. A lot of the conversations surrounding Miller Lite and Coors Light are calorie content now.”

But Dr. Malone says there still some challenges for those who want to start their own brewery, especially have to hurdle thousands of federal regulations. He offers this advice to jump start a brewery, “You want to think about places, if you’re going to open a brewery, that either have a lot of breweries and you’re going to be capturing some of that agglomeration, or you’re going to look for a place that has a large population with no brewery yet.”

Dr. Malone also says beer sales have greatly benefitted agriculture and farming, and has stifled economic growth overall. You can hear his interview on an upcoming WKOK Sunrise.